ONCE UPON A TIME IN THE MOUNTAIN OF LUGH ... or Nice? 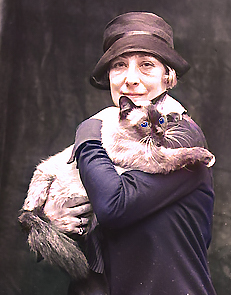 “In those days,” began slowly our female friend [this is Mrs Adams], “in a temple built at the flanks of the Mount of Lugh, lived in prayer the venerable Kittah Mun Ha, Grand Lama, precious amidst the precious, from which the very god Song Hio braided the golden barb … There was not a minute, not a gaze, not a thought of his existence that wasn’t dedicated to the adoration, the contemplation, and the pious service of Tsun Kyankzé, the goddess with sapphire eyes, the one who presides over souls’ transmutation, the one who allows the Kittahs to come back to life again in the form of a sacred animal, to the time of its existence, before returning back in a body haloed with the total and holy perfection of the grand priests. Close to the god, Sinh, the dear oracle, meditated. He was a completely white cat, with yellow eyes, from the reflection of his master’s golden barb and from the golden body of the goddess with sky eyes … Sinh, the counselor cat, whose ears, nose, tail and extremities were the color of the soil, the brand of a stain and impurity for all that touches or can touch earth.

Now, one night, as the malevolent moon allowed the cursed Phoums coming from the loathed Siam to approach from the holy enclosure, the Grand Priest Mun Ha–without ceasing to implore the cruel destinies–entered slowly in death, with his divine cat at his side and under the anguished eyes of all the devastated kittahs …. Then a miracle happened… the unique miracle of immediate transmutation: at one jump, Sinh was on the golden throne and perched on his saggy master… He braced himself on this head, heavy with years, and which, for the first time was not gazing to his goddess… As the cat stayed in its turn deadpan in front of the eternal statue, one could see the bristling nap of his white backbone suddenly becoming golden yellow. As his golden eyes became blue, immense and profound like the goddess’ eyes. And, as he was slowly turning his head toward the southern entrance, his four paws, which were touching the venerable crane, becoming flashing white until the place recovered by the silk of the sacred clothes. Then, as his eyes turned toward the southern entrance, the kittahs, obedient to this imperative gaze, loaded with hardness and light, hurried up to close the heavy bronze door on the first invader…

The temple was saved from profanation and looting… Sinh had not left the throne. On the seventh day, without having made one movement, facing the goddess, his eyes in her eyes, he died, mysterious and hieratic, taking Mun Ha’s soul away to Tsun Kianksé, as he was too perfect for earth now… And when seven days later, the priests assembled in front of the statue, and consulted in order to decide Mun Ha’s succession, they saw all the temple’s cats running up together … All the cats were clothed with gold and white gloves and all their yellow eyes had changed to deep sapphire… Then, all of them in silence surrounded the youngest Kittah, chosen by the reincarnated ancestors according to the goddess will… And now–pinpointed the storyteller woman–when a sacred cat dies in the Lao-Tsun temple, a Kittah’s soul replaces forever his place in the golden god Song Hio’s paradise. But also, she concluded, “Woe to the one who hastens the end of one of these marvelous animals. Even if he didn’t want to. He will suffer the cruelest torments until the sad soul he disturbed finds peace…”

CREATION of the LEGEND

Miss Juanita Leotardi invents the legend and pretends the cat originates from Burma (Myanmar),  was stolen in a temple and imported to France by Harold Vanderbilt. All actual Birman cats descend from Poupee de Madalpour and  Hiram-Roi de Maldapour.

Miss Marcelle Adam, president of the Cat Club,  publishes a newspaper's story in the "Matin" and a book later called "Eros Vaincu" that tells the legend for the first time. Veterinarian Jumaud publishes his book on Cats that reiterate the story

During the 1st Cat Show of the Cat Club of Paris in May, Manou and Poupee of Maldapour are presented to the parisian public.

Marcel Crevoisier (who begins to breed in 1929) produces the most famous Birman cat: Dieu d'Arakan.

THE EXTRAORDINARY ADVENTURE OF THE BIRMAN CAT

Order my book on amazon.com

FOR THE LATEST NEWS & UPDATES